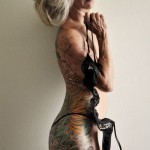 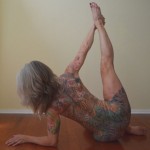 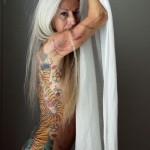 Meet Texas native Julie H., also known as The Burning Lotus – a 56-year-old model who has been taking provocative pictures of herself for a while now.

“I posted my images initially as a dare to myself ― again, an affirmation of existence,” Julie said. But after posting a side picture of herself holding up her black bra, Julie became pretty popular online. “The ‘senior ink’ image caught fire in a random way that still confuses and overwhelms me,” she said. Ever since Julie’s Tumblr audience has been growing and she now has over 92k followers that admire her and the way she portrays herself.

What do you think ?